Valentina came to Denmark from Romania hoping to make a better life for herself and her family. She started working as a cleaning assistant, and when she got a job cleaning for the bus company Anchersen, she decided that she wanted to become a bus driver herself. She told the company Anchersen that she wanted to learn Danish properly and drive their buses. Anchersen was thrilled and rewarded her determination with a job. 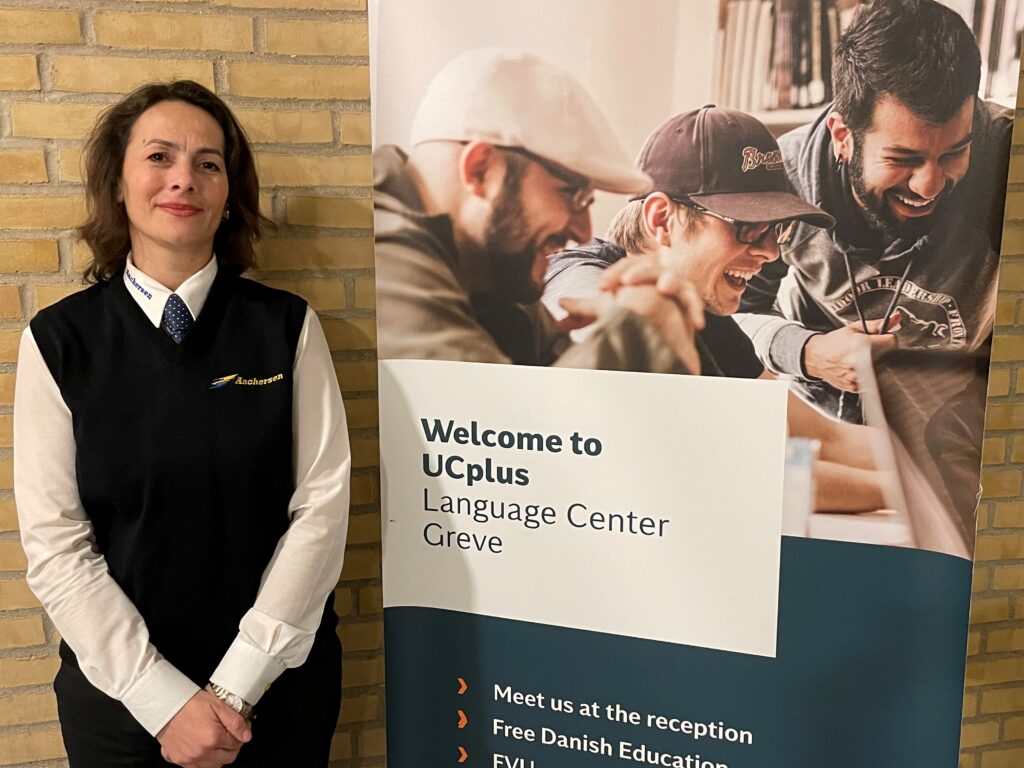 Valentina was determined to learn Danish properly. She worked her way through Danish courses at UCplus, and has resulted in her having both passed the Danish test PD2, that she has obtained a bus driver’s license and a job with the bus company Anchersen.

From Danish courses to bus driving licenses at UCplus

“When I came to Denmark, I was completely alone. I missed my family, but I cleaned so much that I barely had time to miss them. But I wanted to learn Danish.”  In 2020, Valentina saw one of UCplus’ posts on Facebook about learning Danish online. She did not want to learn Danish that way, so she wrote to UCplus’ Language Center in Greve and asked if there were other options.  “There was an evening shift I could start on, and it suited me well because I had to clean in the morning. I took module 1 and 2 in the evening. But I wanted more hours so I could learn faster. Then I had the opportunity to come to classes during the day, and it was really good.”  In June 2022, Valentina passed the Danish test PD2. And barely two months later, she switched from UCplus in Greve to UCplus in Skovlunde, where she started the bus driver training.

Passed the driving test with ice in the stomach

In Valentina’s eyes, it was one thing to learn Danish, quite another to learn how to maneuver a 15 meter long bus.  “Before I had to go up for the driving test, my heart was beating so hard I was sure you could hear it. But I had learned a lot from the teachers. Among other things, all the mechanical expressions, but also something else. They also helped me to be calm and one of them always said to me; ‘ice in the stomach – ice in the stomach’. ”  Valentina used everything she had learned. She kept a cool head, got over her pounding heart and passed her driving test first time. She then proudly drove on to her boss at Anchersen and showed the driver’s license. And as promised, there was a job ready for her as a route bus driver.

The job as a bus driver gives a good mood

Valentina is very happy with her job as a bus driver at Anchersen. For many reasons. But at the top of the list are the nice colleagues and friendly passengers.  “I love talking to people, and at Anchersen I have so many good colleagues that I talk to when I’m at work.  It’s fun to drive a route bus, because many passengers ride the bus every day, and some of them say to me ‘Aaah, you’re new to the route’, and then they help if I’m in doubt about the route.”  Although Valentina now has a permanent job, she would like to continue with more courses at UCplus, because her dream is to obtain Danish citizenship.  “I live here. I work and pay taxes. And then I would also like to be able to vote for the Folketing.”

If you are new to Denmark and want new job opportunities, you can do like Valentina and take Danish courses at UCplus. You can read more about both the Danish education and FVU courses here

UCplus also offers Danish and Driver training, which is for you who would like to be a bus, taxi or truck driver, but need to learn more Danish. Read more here.

Or visit us at one of our 7 language centres